As you may remember, last April the yoga classes were live streamed from Hawaii. One of the longtime students and personal friend, Rochelle, made her parents house generously available to me. I jumped at the opportunity to spend some extended time with my daughter Yunji, her husband Kent and of course my two grandkids Kaya and Kenzo. During the 80s I lived for eight years in Honolulu and still have close friends there as well as fond memories. To this day I consider it a second home. 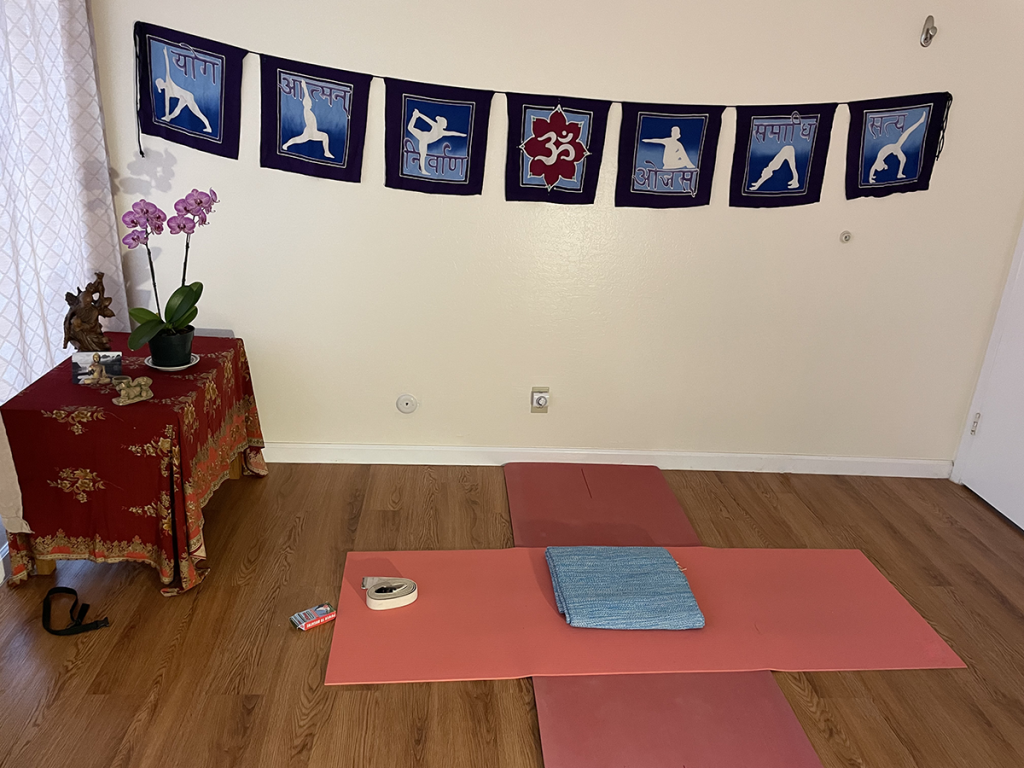 The yoga room in Mililani

The first task at hand was setting up the yoga studio. I had given myself an entire day to do so. I rearranged the furniture, purchased an orchid nearby and put a colorful piece of fabric, that I had rescued out of our garage in San Francisco, on the wall. Then I tested the Internet connection and strung a 75 foot cable from the router at the entrance, through  the hallway and into the new yoga room. After that I could have easily called it a day. Doing so would make it merely a performance though, an act really. In order to genuinely bring it alive it was essential to practice by myself within the space, hopefully on a daily basis.

I was beginning to reflect that “Coffee and yoga“ has now taken place from many different locations. Diverse backgrounds if you will: the yoga room in San Francisco, our living room, Guerneville, my daughter‘s office in downtown Honolulu, even an Airbnb on the edge of Waikiki. Each environment has offered its own challenges as well as gifts and inspiration.
For the next three weeks I was situated in Mililani, in the middle of Oahu, about 40 minutes outside of Honolulu. Mililani has an almost suburban feel to it, no tourists to be found.

What immediately stood out in the new yoga room: the quiet and within the stillness a variety of bird sounds. Rochelle later informed the fellow students and me about these birds as all of us had gotten curious. Rose collared parakeets, morning doves, North American cardinals to name just a few. None of them native birds, yet quite happy and content in their newfound habitat. Occasionally a gecko joined the chorus.

Because of the time difference I was getting up at 6 AM preparing for the mid morning class starting at 7:30 AM, island time. It was an interesting and rather energizing experience as I tend to be more of a night owl. My body really liked the change! I wish I could inform you that I stayed with it on my return. Alas that’s not the case as old habits have crept back in. 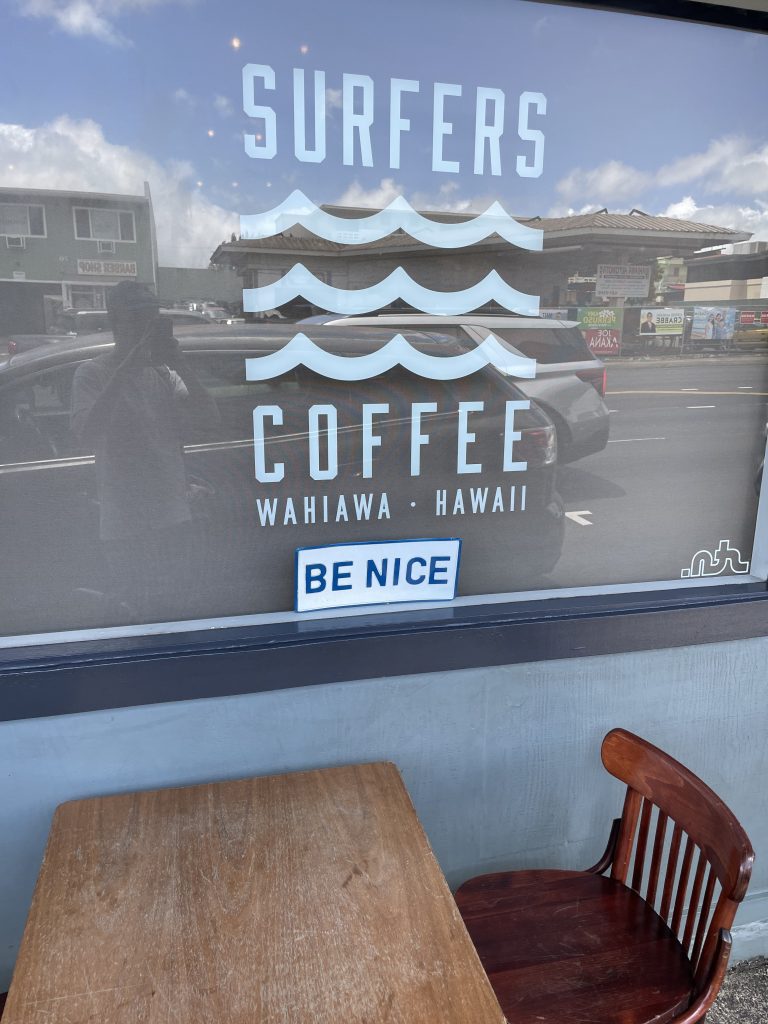 Second order of the day: finding a nice coffee shop! “Was there such a thing in the middle of the island?!” I had asked Rochelle prior to leaving. Indeed there was, about 10 minutes away in nearby Wahiawa. Back in the 80s Wahiawa didn’t have the best reputation, to put it mildly: strip bars, prostitution and generally an unsavory vibe. Of course that was over 30 years ago, I had to remind myself. Now it was a sleepy town with a mix of locals, military with the base close by and assorted hippie types. The latter were running a roomy coffee shop called “Surfers coffee”. It turned out to be a cozy place to hang out and make notes for the classes while sipping a morning cappuccino.

Several times a week I was heading straight to Honolulu immediately after class to babysit Kaya and Kenzo. Those turned out to be the best moments of the trip. I vividly recall making some coffee for myself while babysitting Kenzo. He looked at me wide-eyed and proclaimed: “Coffee is bad for you!”

“Who told you that?” I asked incredulously.

“My dad, but it’s not really true!” he responded with a mischievous smile, slowly widening across his face. He was curiously awaiting my response. I smiled back and took a sip of the hot coffee. 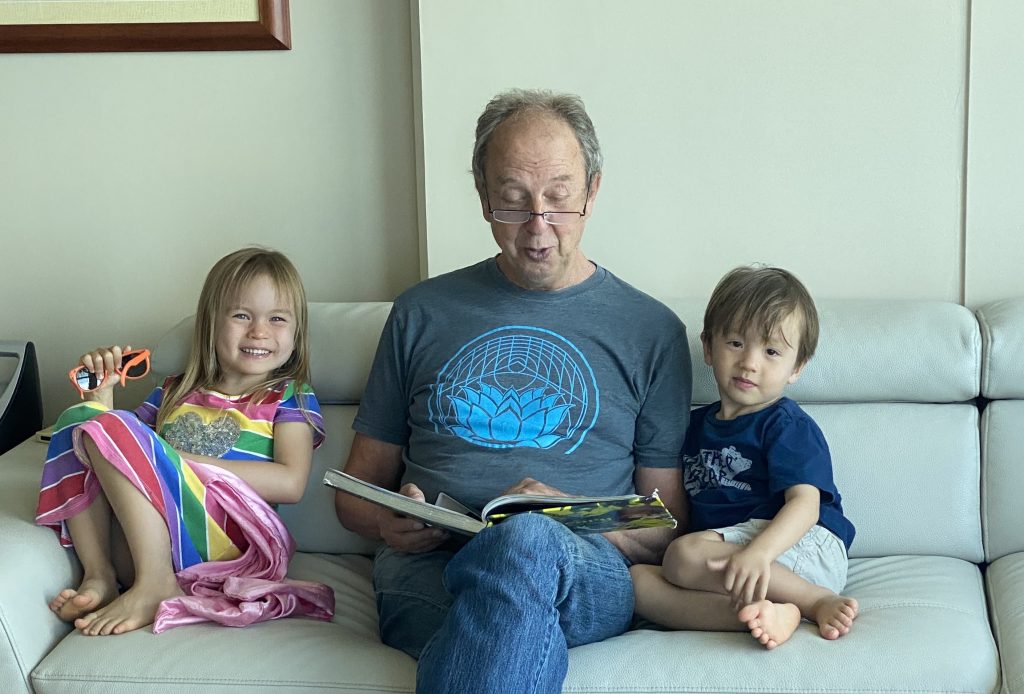 Story time with Kaya and Kenzo

Later that day I asked Kaya if she considered opa “kind of old”. I know it’s an odd question, but my own grandparents seemed ancient to me when I was a little kid. For a moment she hesitated, not knowing quite what to say. Then she glanced furtively at her mom who nodded in the affirmative, giving Kaya permission to tell me: YES!

These are some of the many memories flooding my brain as I reflect on my recent visit. I intend to continue taking  the on-line  yoga practice to a variety of locations and settings. It’s my wish and vision to keep sharing these experiences with all of you. Thank you!!