On January 6 my day began quite ordinary. I had a cup of warm lemon water, later some coffee as well. Subsequently I taught my on- line yoga class in the mid morning.

Afterwards I was leisurely putzing around in the kitchen when Rosemary texted me. She is a good friend and had attended class a little earlier. The text read: “Are you watching any TV?”

“Should I turn the TV on?” I replied. “Yes!” was the emphatic response. I followed Rosemary’s lead and stayed glued to the television for the rest of the day and most of the evening. 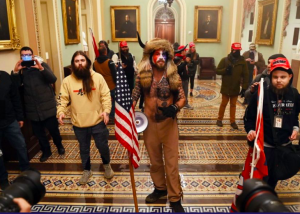 It superseded all other activity, including my afternoon yoga practice. The feeling was momentous, on par with 9/11 with a lot of unfortunate symbolism.

In fact the effects are still reverberating, as if they were aftershocks in an earthquake. Like an earthquake it’s too early to tell if more, possibly stronger, shocks are yet to follow. It adds to a level of un-ease that I notice in myself and those around me.

Inside a blog post like this as well as in my yoga classes I usually leave politics at the doorstep. One can argue how wonderful it is to have a refuge from the world and politics: Samsara.

Yet, it’s become increasingly harder to do so. After all we are collectively inhabiting our environment, soaking up its energies.

At the proverbial yoga studio, teachers tend to put a good spin on things. We like a positive arc.

Some (not all) corporate environments I used to teach at, made me keenly aware how well many individuals are able to compartmentalize. In so many words: “Let’s get fit with yoga now and then go back to supporting a neo fascist”. I  learned both to whisper and to keep my mouth shut.

It begs the uncomfortable question: does a so called spiritual practice automatically lead to a desire for social justice?

A couple of examples: in Myanmar (Burma) some Buddhist monks actively perpetuate hate and are complicit in the genocide against the Muslim Rohingya minority.

In India, often naively revered in the yoga world, present day Hindu nationalists could be viewed as Hindu fascists.

One more, as I can’t help myself!

Hitlers long time mistress, Eva Braun was doing a better Urdhva Dhanurasana (wheel) than I’m able to do these days. 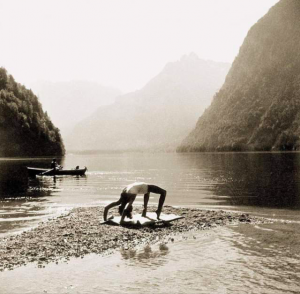 I’ll illustrate it with a photo by the lake, for your viewing pleasure.

Let’s get back to our little yoga community. The one I deeply care about and meet with almost daily.

Talking to friends and students and touching many bodies, prior to the pandemic, I’ve come to the realization that we have been collectively holding our breath for the last four years. Now we’re in a crescendo. Some of us are increasingly angry, others deeply sad, many in a dazed overload.

Consequently all of us have been building a lot more armor.  A reasonable response actually.

Usually some of this armor melts when we touch, hug and get closer to each other. Smiling also helps. All of these are in short supply in the world of Covid.

Bodywork is kind of risky these days. We are indeed back to our personal yoga practice. This is what we have left. It’s going to keep us strong, which of course is very important. Yet, can we use our practice to melt some of this armor, instead of simply “perform”?

Could this be the most crucial aspect of our practice at this present time? Certainly of more importance than whether we can touch our toes or not.

For years I’ve noticed that modern yoga, particularly in the US, is way too much about the inhale. The exhale is almost an afterthought.

In other words, stuff we no longer need. Things we hold on to and use to build layers upon layers of armor.

In our practice let’s sigh and exhale…a bit more fully. I consider a sigh a small (and sometimes not so small) energetic release, especially if its spontaneous and not forced. Think of it like a burp, but an energetic one. We do get indigestion when we don’t burp when we need to. It’s similar with these energetic burps. We start to feel weird and don’t know why.

Yoga can definitely have a place in meeting the challenges of these demanding times. 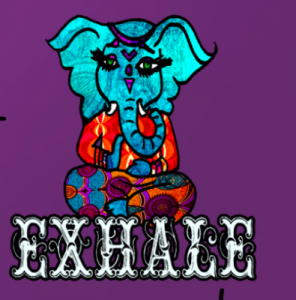 It tends to work better in communities, even if they are on line for now. Rather than simple exercise, yoga becomes an energetic medicine that we share with each other.